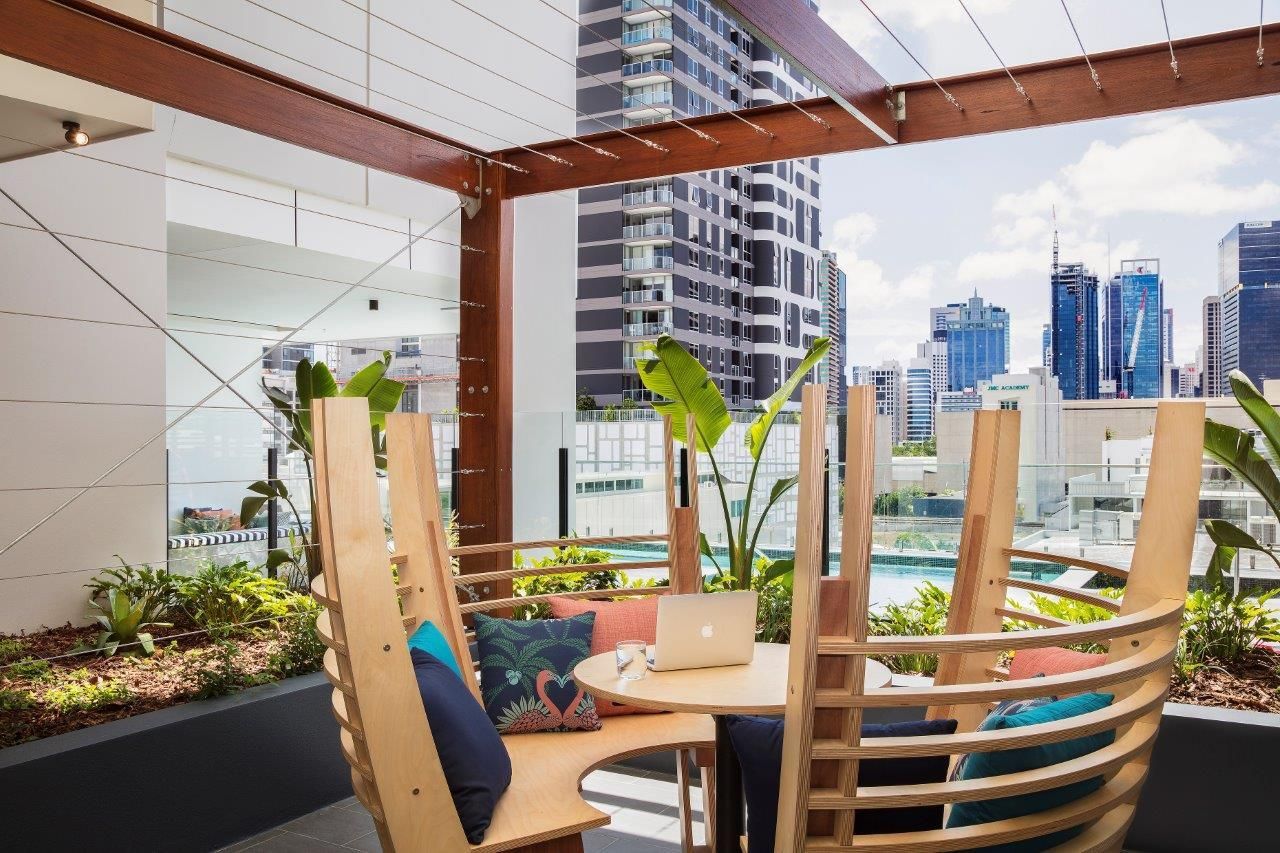 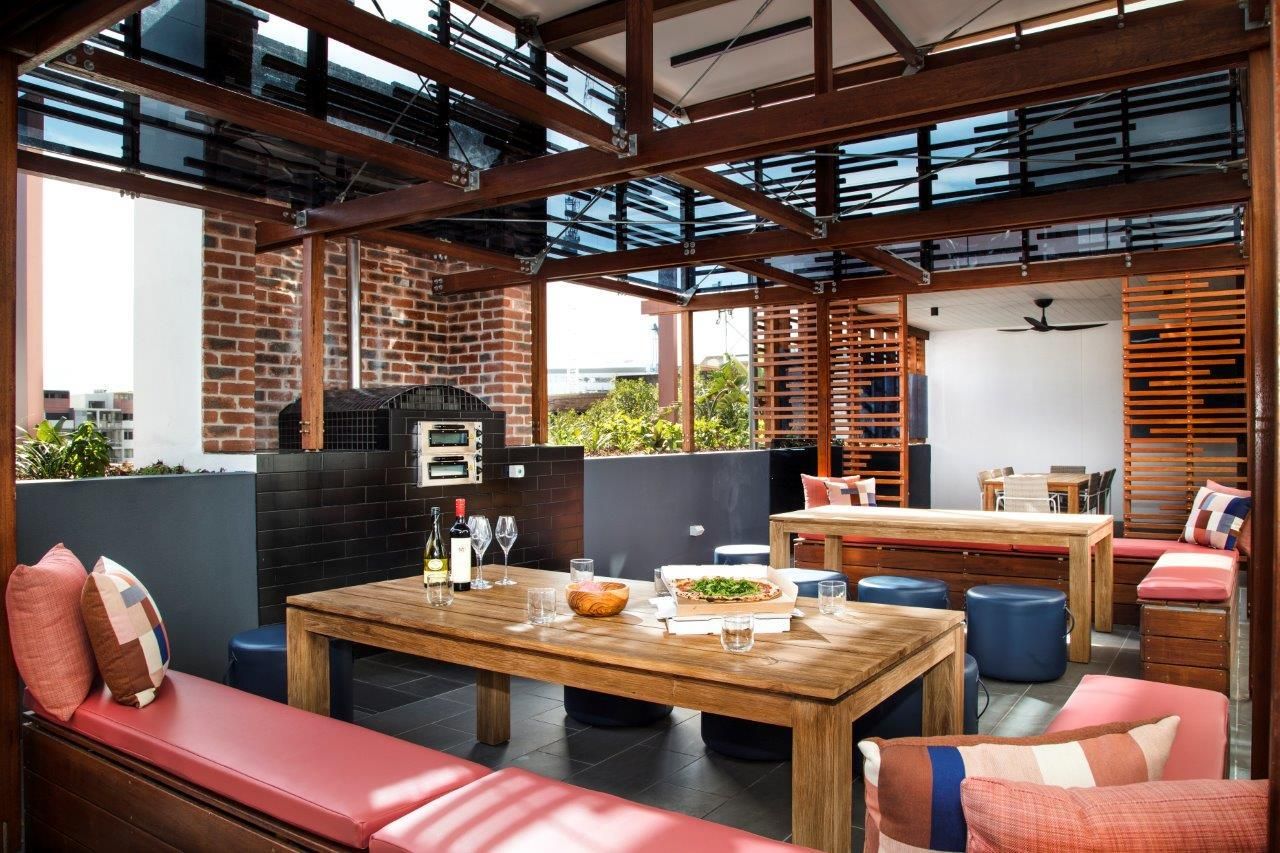 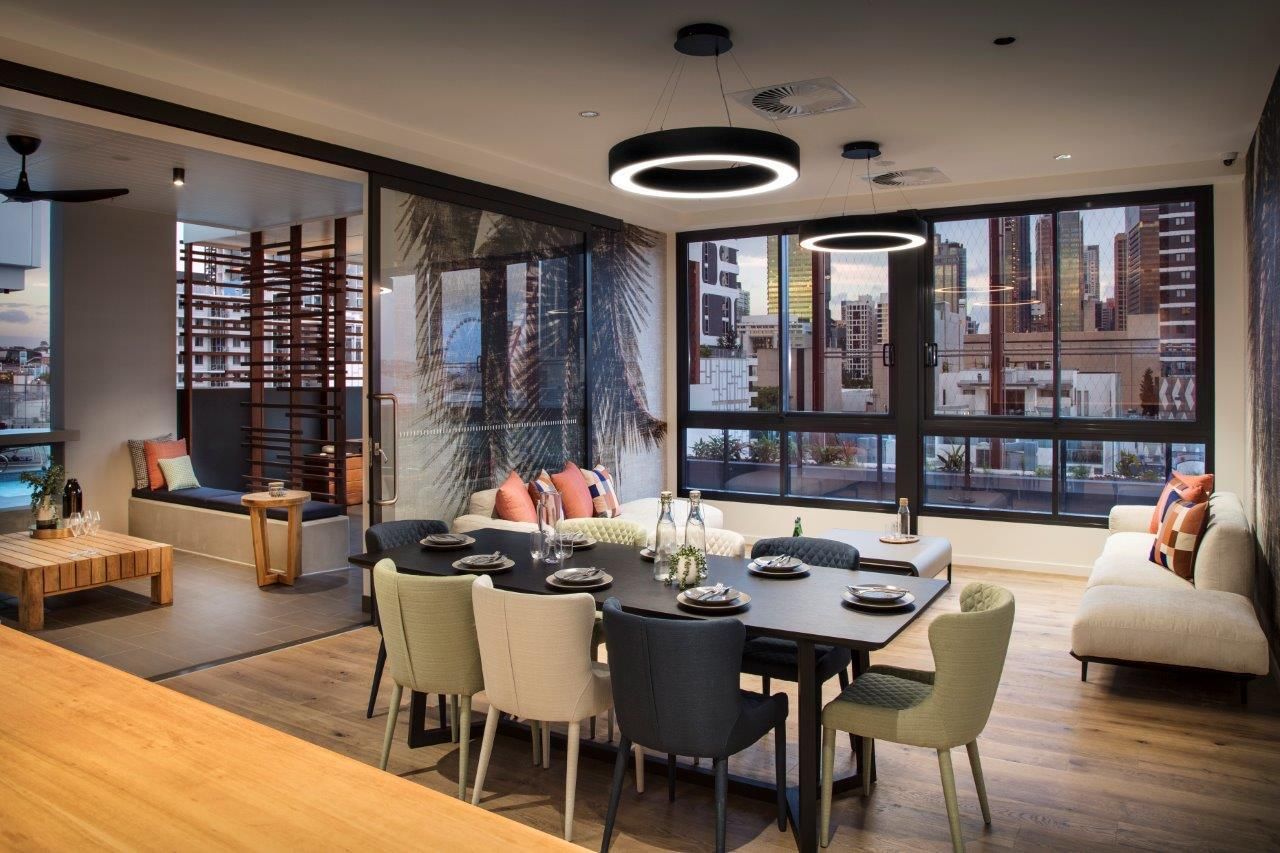 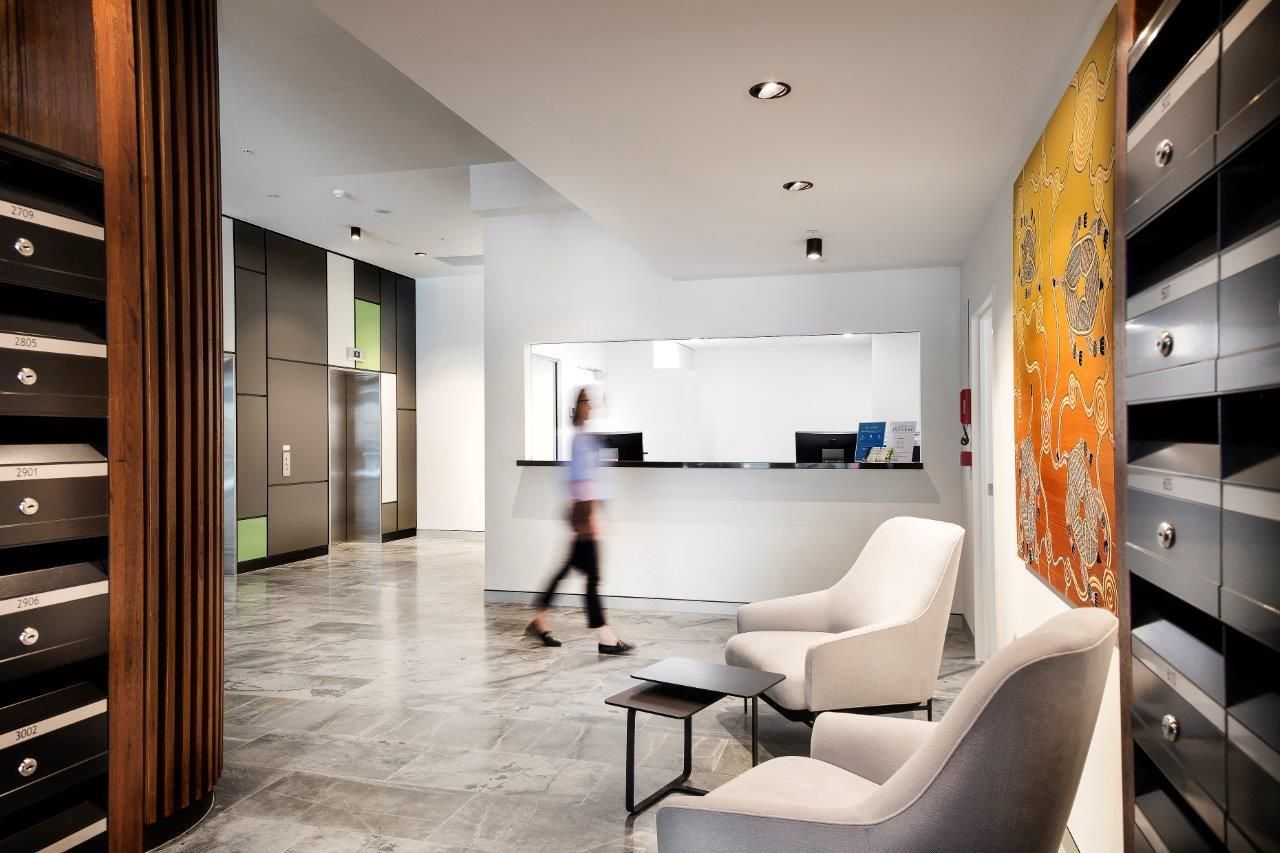 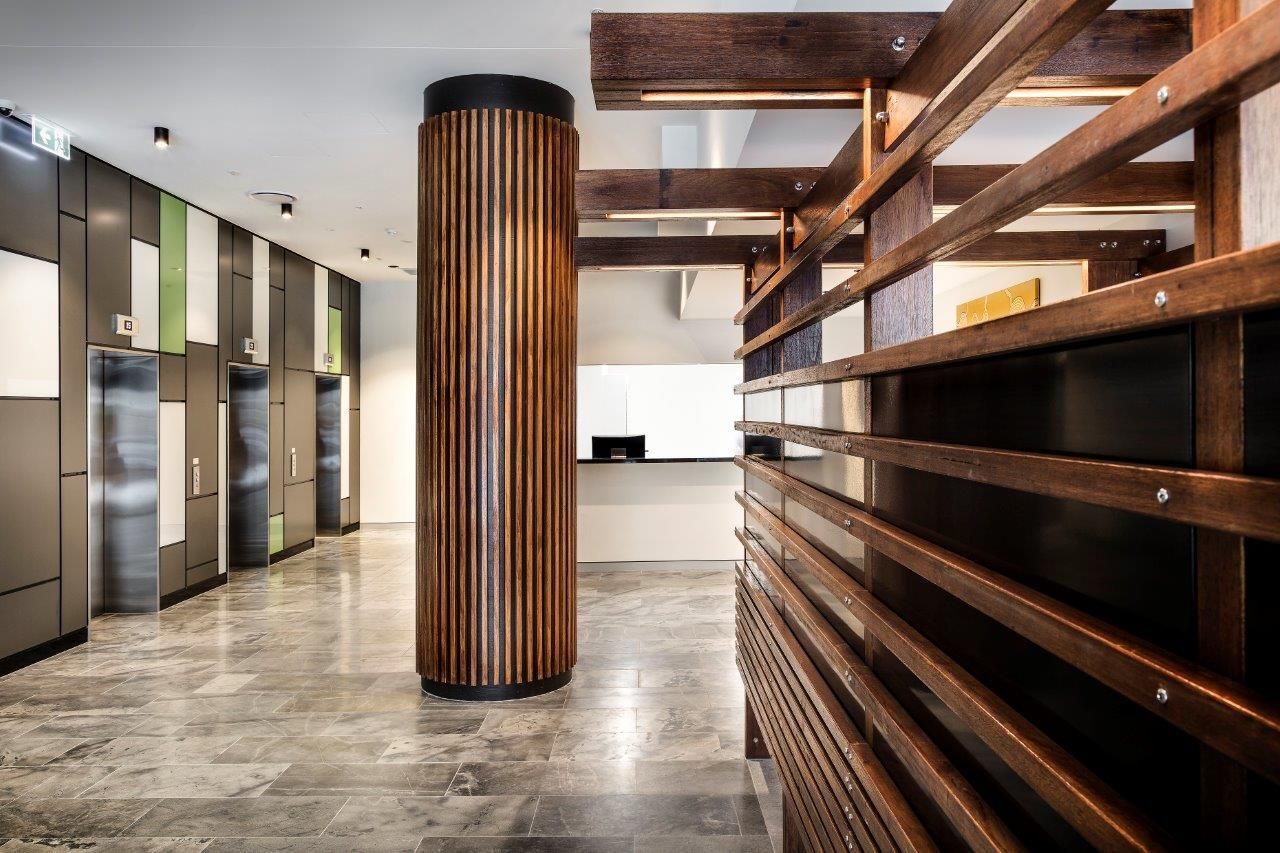 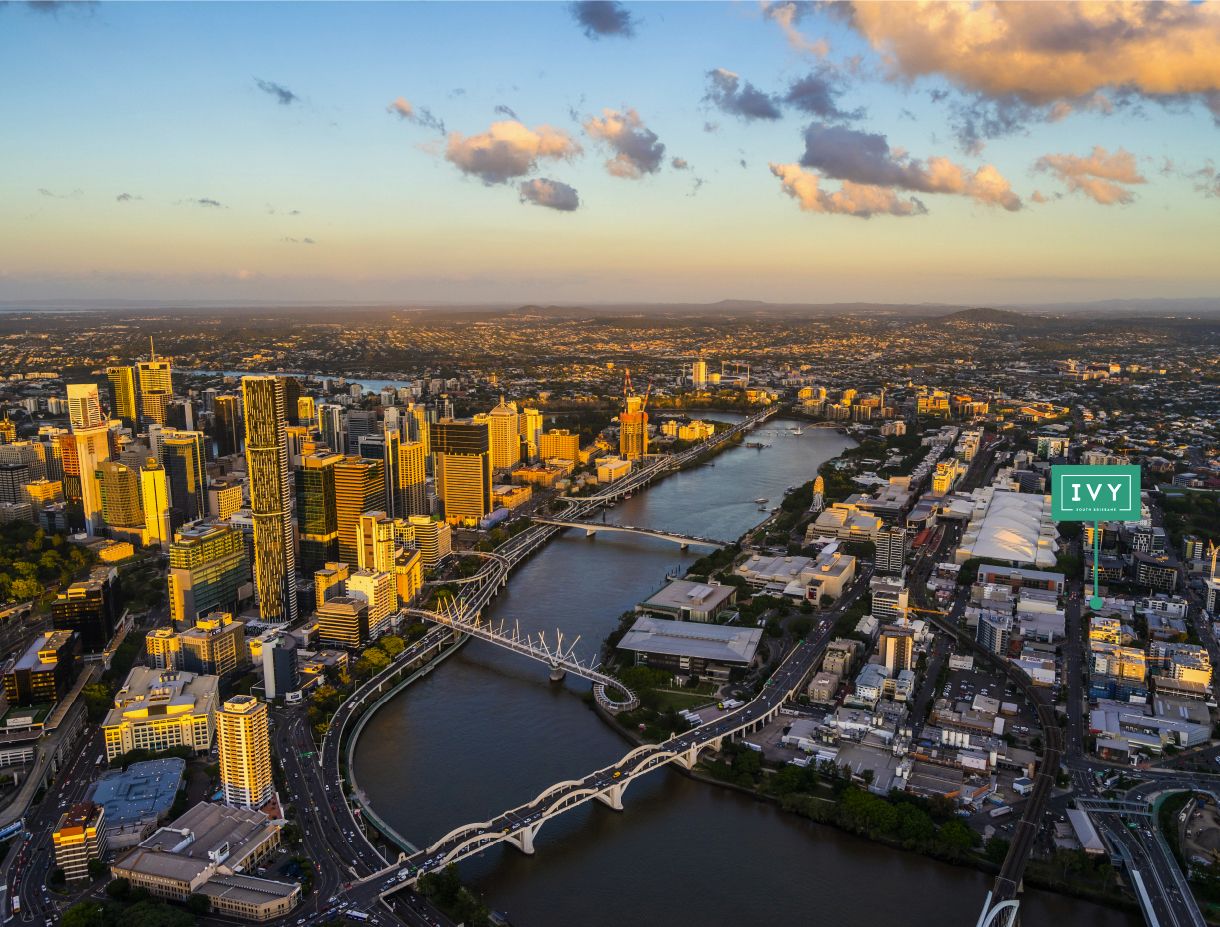 - This project was completed early 2018 and ready to move into

- 472 apartments across 2 residential towers with a shared podium

Ivy & Eve is a dual tower development located in Merivale Street, South Brisbane. This project is predominantly targeted towards the investor market. Many of the apartments are quite compact, however the major selling points of this project are its location and the extensive amenities that are available to residents.

The building is well located for those who enjoy cafes, dining and entertainment. It is almost exactly halfway between the Grey Street precinct in Southbank and the Melbourne Street/Boundary Street dining precinct in West End. The Brisbane Convention Centre, GOMA and QPAC are all within 300m of this development. There will always be something to do nearby. It goes without saying, however, that this is an extremely busy part of Brisbane and residents will be dealing with noise and traffic as part of their day-to-day life.

About the Ivy & Eve Project

Ivy & Eve are two separate apartment towers that share a five level-podium, basement and resident facilities. There are a total of 472 apartments across the two towers with a mixture of one, two and three bedroom configurations available.

One of the major benefits of this development is the facilities that are being provided for residents on level five. There is an expansive recreation deck that overlooks the CBD. The deck includes a lap pool, cinema, teppanyaki dining area, IT pods, pizza oven, beach house, gym and play room. The deck has been designed so that each different area feels separate from the rest. It will undoubtedly be an enjoyable recreational area.

Parking for this building is located in both the basement and inside the above-ground podium. All apartments have at least one carpark allocated, with some of the three bedroom apartments having two allocations. There is no option to buy an extra car park at Ivy & Eve.

Ivy & Eve is situated on Merivale Street in South Brisbane. This location is within walking distance of both the Grey Street and Boundary Street entertainment precincts. As we mentioned above, this is a densely populated, central location that is close to all of the modern conveniences. There is entertainment, shopping, dining, cafes, farmers markets, bars. Public transport and more all within walking distance of Ivy & Eve. The downside of this is traffic, noise and general ‘hustle and bustle.’

Ivy & Eve residents will have direct access to Brisbane major entertainment precincts. Within 1km of the building is the Queensland Gallery of Modern Art, The Queensland Performing Arts Centre, The Convention & Exhibition Centre, the Museum & Science Centre, Southbank Parklands, Suncorp Stadium and the CBD. On top of this, South Bank, West End and the CBD are home to an assortment of restaurants and cafes, from hidden gems to premier fine dining restaurants. All are within walking distance or a short trip on public transport or Uber.

South Brisbane is a natural extension of the CBD that is connected to the north side of the river by five bridges that allow car, bus, train and pedestrian crossing. There is an abundance of public transport in the local area. Just 400m from Ivy & Eve is the Cultural Centre Busway Station and the South Brisbane Train Station. Between these two transport hubs, most of Brisbane is conveniently accessible. There are regular services running that go to all major areas of the city. Travelling by car to wider Brisbane is also simple. The Go-Between Bridge entrance is 400m from Ivy & Eve and it allows direct access from South Brisbane to the Inner City Bypass, Airport Link, Clem 7 and beyond. A trip from Ivy & Eve to the Brisbane Airport would take just 15 minutes.

There are many educational institutions close to Ivy & Eve. It is in the catchment for Brisbane State High School, one of Brisbane’s best public high schools. It is also close to Sommerville House, St Laurence’s, Brisbane Grammar School, All Hallows, University of Queensland, Queensland University of Technology, the Queensland Conservatorium of Music and Queensland College of Arts.

South Brisbane is one of Brisbane’s fastest growing suburbs. Between the 2006 and 2011 Census, the population of South Brisbane increased by 48% to record a total population of 5,420 people. Government predictions show that it will continue to be a high-growth region into the future.

The specifications for this project in the kitchen has polished, reconstituted stone to all bench tops and on islands. The kitchens have European appliances, 4 burner gas cooktops, stainless steel oven and slide out range hoods. The dishwashers is semi-integrated. 4kg wall mounted dryers are also included in these apartments.

The bathroom has a floor tiles and glossy wall tiles with a small, mirrored cabinet and a wall mounted sink with chrome mixer. The shower doors are frameless glass.

There are several option for upgrades including timber floors and blinds. The price of these varies with each apartment.

Approximately 65% of all apartments at Ivy & Eve have been sold to investors. The marketing agents have detailed information for investors that include rental appraisals and cash-flow analyses that are available on request. This complex will have on-site management.

Both the developer and builder for Ivy & Eve are well-established companies. Abacus Group, who is developing the project, is one of Australia’s largest diversified property groups that have been in existence since 1996. They have a long history of successful projects. The builder is Hutchinson’s, which is a top-tier, Australia-wide building company.

There is no sales display for these units. However, our agents are more than happy to meet buyers on-site by appointment. No schools are available. 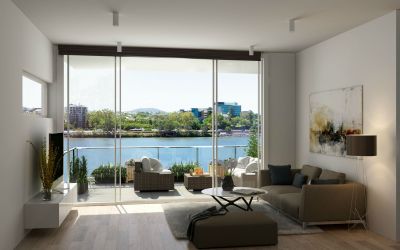 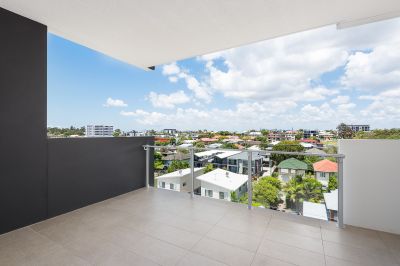 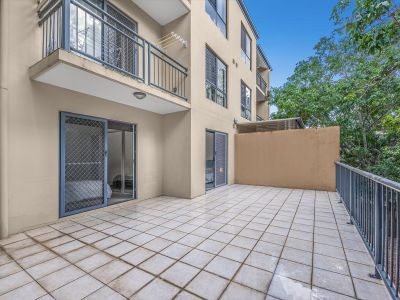 Apartment
2
1
1
Back to Search Results

ENQUIRE ABOUT THIS PROPERTY